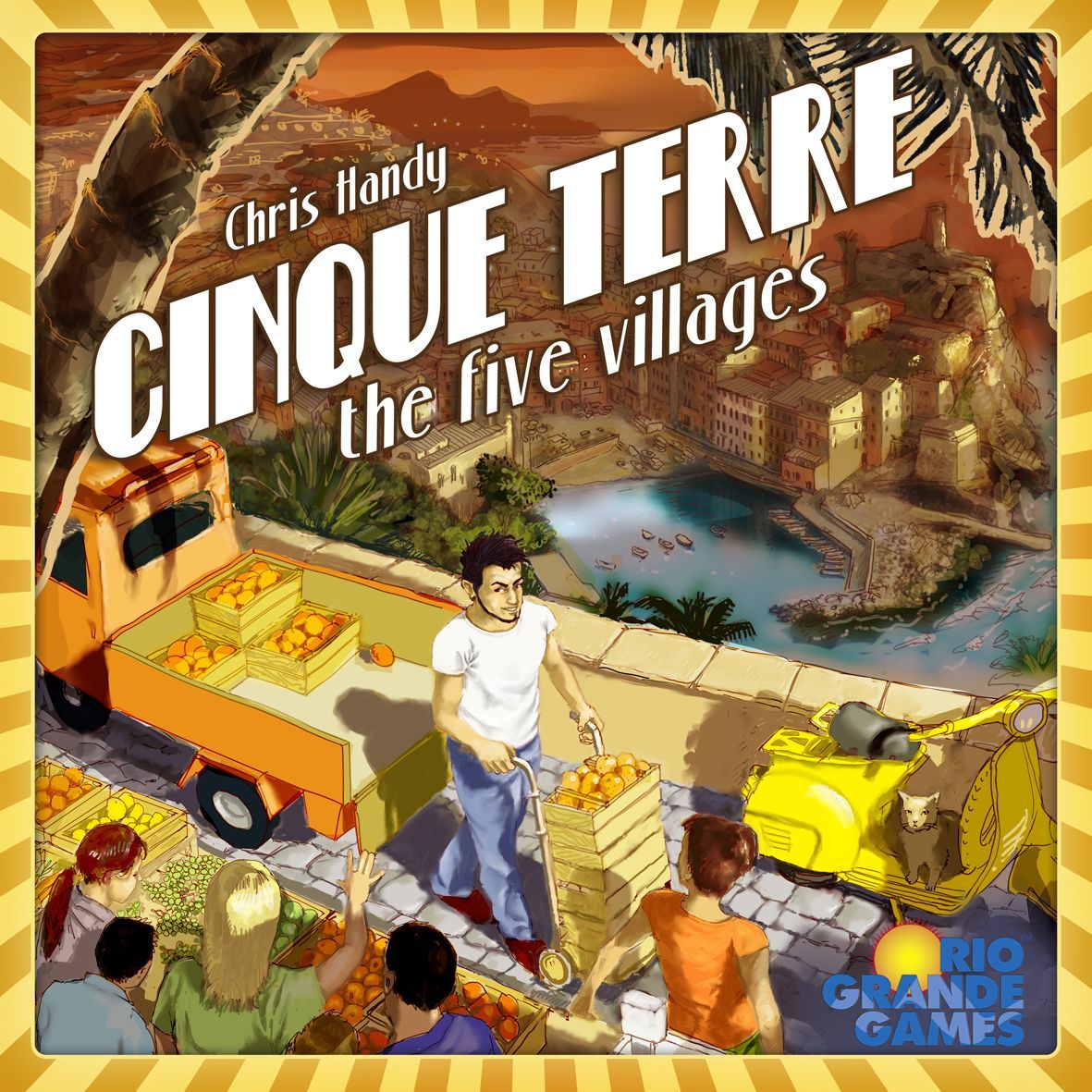 The Cinque Terre are five coastal villages in the Liguria region of Italy known for their beauty, culture, food, and proximity to one another. Produce carts are commonly found in each village marketplace.

In Cinque Terre, a game of strategy, players compete to sell the most valuable produce in the five villages. Players act as farmers and operate a cart in which they will harvest produce and deliver them to the five villages to sell. Additionally, players will compete for Produce Order cards, which reward Lira points for selling desirable produce in specific villages. Players track sold produce in each village using their Fulfillment Cards. The winner is the player who gains the most Lire by selling valuable produce, gaining popularity in the villages, and fulfilling Produce Orders.


Game Set Up and Play

During setup in Cinque Terre, colored dice are randomly pulled from a cloth bag and rolled to establish the prices each village will pay for select produce. Each player also begins play with a private order only she can fulfill. Five public orders are turned up that all players can work on, though only the first player to fulfill each public order will score points for it. The Most Popular Vendor cards (1 for each village) are placed face up along one side of the board. The first player to fill an entire row with produce cubes for a particular village earns the Most Popular Vendor card for that village, which provides bonus points. Four Produce cards are turned face up and each player receives 4 to begin with along with a Fulfillment board and Produce Truck in their color.

On your turn, you can perform 3 actions in any order or combination you choose:


Take a Produce Card - either a faceup card or one from the deck.
Move your Produce Cart up four spaces clockwise around the board.
Harvest produce from the location your cart is currently at. Each produce cube you wish to harvest requires a matching card. Two identical cards can be used in place of any one other card. Your cart can hold up to 4 produce cubes at a time.
Deliver produce to a village. Unload the produce cubes you wish to deliver and place them in the appropriate spaces for that village on your fulfillment card.

Players take turns taking their 3 actions until one player has completed 5 public orders (Most Popular Vendor Cards also count as public orders for determining game end), then everyone gets one more turn, including the player who caused the game to end.