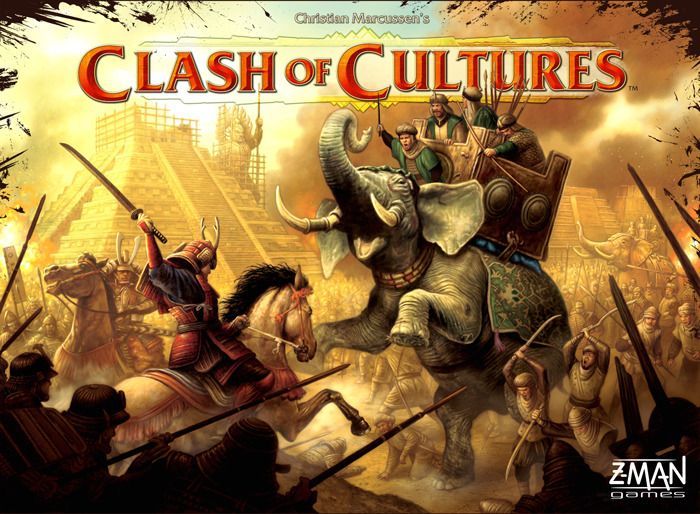 From Christian Marcussen, the creator of Merchants and Marauders, comes Clash of Cultures, a civilization game in which each player leads a civilization from a single settlement to a mighty empire. Players must explore their surroundings, build large cities, research advances and conquer those who stand in the way. The game features a modular board for players to explore, 48 distinct advances, seven mighty wonders, and loads of miniatures and cards. The winner will create a culture that will be remembered and admired for millennia.

Advances
The game features about 48 distinct advances. The whole "tech-tree" is very flexible with no dead ends, yet still intuitive, sensible and "realistic." Additionally you have a great overview of what advances other cultures have - no need to ask - just look.

Modular Board
Players start with a civilization in its infancy. Move settlers to uncharted regions and reveal the terrain and its resources. Several mechanisms have been implemented to assure that an unlucky placement of region-tiles won't be a decider.

Playing Time
The game covers a time span similar to AH Civilization - that is to pre-gunpowder. This epic game is playable in about an hour per player! This is a pretty good playing time for a game that covers so much ground as this game will.

City management
Players expand their cities through the game. But not just to the generic larger city. Players instead choose a building type which represents the growth of the city. For instance you can expand a city with a port, fort, temple and academy - all with different benefits! Additionally cities can be "angry," "neutral" and "happy." Everything integrated in an intuitive and elegant fashion.