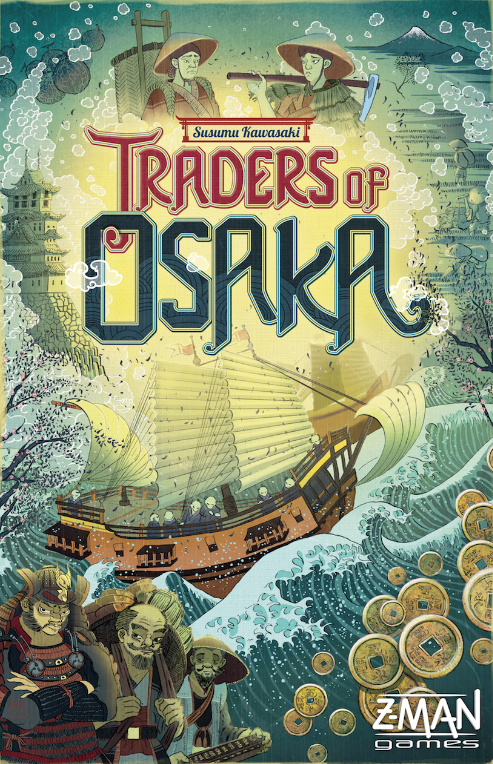 In Traders of Carthage, players are merchants who are attempting to ship four different types of goods from Alexandria to Carthage. Players affect how quickly or slowly the ships move and can trigger pirate raids that may cost their opponents their goods. (Traders of Osaka moves the gameplay to a new continent and era, with players now trying to deliver cargo from Osaka to Edo, but otherwise gameplay remains the same.)

The game has a small board that shows the route the ships will follow, marking safe ports and dangerous waters. The board also has two spaces for the draw pile and discard pile and shows where the Market and Farm cards are laid out. The game also contains a deck of cards that have multiple uses, 48 achievement tokens for when goods are sold, four ship pieces to mark how far the ships have sailed, four trader pieces to indicate a player's scoring pile, four reservation pieces for players to mark cards they wish to purchase or take on a later round and a rulebook.

The game is a set collection game at its core. Player are attempting to collect sets of goods that will allow them to collect cards that will be worth points at the end of the game.

During the game, the cards can be used to represent goods when laid out in front of players, to represent gold to purchase good when played from their hands or urns which players will use to protect goods from pirates. Deciding how to use the cards and when is the basis of playing the game.

On a player's turn, they can do one of three things: Buy Goods, Get Coins or Reserve a Card.

Buying goods has the player buying cards from the Market. There will be a number of cards laid out, face up, in the Market. Each card has a gold value in the corners and indicates how much a card is worth (either 2, 3 or 5). When a player buys goods, they must buy all the cards in the Market, using cards in hand to pay. If a player cannot afford the whole Market, they cannot do this action. Any cards purchased this way are laid out, face up, in front of the player. These goods are now aboard the ship of the matching color. Then the player moves each matching ship either 1 or 2 spaces towards Carthage (1 space if 1 card of that color was purchased, 2 spaces if 2 or more cards were purchased). If a ship moves onto Carthage, a payout occurs and pirates attack (this will be explained in detail later). If the Market is bought out or if the current player can't take or buy market cards (due to reservation pieces), the cards in the Farm (3 face up cards) are moved to the market. 2 cards are drawn from the draw pile and are added to the Market. Then 3 new cards are drawn for the Farm and are placed face up.

Getting coins has the player taking a single card from the Market and placing it in his hand. That card is now money, its value indicated by the gold value in the corners. This is the only way players can increase the amount of money they have.

Reserving a card has the player placing their Reservation piece on a card in the Market or in the Farm. This card is now unavailable to all other players. The Reservation piece is now committed to that card and can't be taken back until the owning player acquires the reserved card either as money or as a good. The owning player may take the card on his next turn or leave it, assuming there is another legal play he can do.

After taking his turn, the next player takes his action, and so on until the game ends.

If a payout occurs, each player that has good on that ship takes part. First the players count how many of that colored good they have. Then they look at the value of the goods and determine which has the highest value. They take that value and multiply it by the number of cards in the set, rounding up to the nearest 5 or 10. For example, if a player has 3 yellow goods and the highest value is 3, they would multiply 3 by 3 to get 9, then round up to 10. The player then takes that value and divides by 5. The result indicates how many cards of that set the player keeps. Keeping with the example, the player would divide 10 by 5 to get a result of 2. This means the player keeps 2 out of the 3 cards from the set. Players keep the lowest valued card first and work their way up until they have the reached their limit. These cards are placed face down near the players with their trader piece on the pile, indicating this is their scoring pile. At the end of the game each card in the scoring pile is worth 1 point. This procedure is completed for each ship that reached Carthage. Then those ships are moved back to Alexandria, ready for another voyage. Each player that had a payout then takes 1 achievement token for each color they scored (not each card they scored).

When during a payout, any player that scores and has matching achievement tokens to the scored goods will add the amount of tokens they have to the highest value card in the set. They then figure out how many cards they keep. For example, if a player has 3 blue cards with the highest value being 5. The player also has two blue tokens. The player would add 2 (for his tokens) to 5 for a value of 7. Then he would multiply 7 by 3, getting 21 and round up to 25. After dividing 25 by 5, the player can keep 5 cards. If a player gets to keep more cards than in the set, as in this example, they keep the entire set and draw cards from the top of the draw pile to make up the difference. These drawn cards are kept face down and are added to the score pile.

After the payout, any ships that are in the two Pirate spaces are attacked. Affected players may now discards cards from their hand to protect their goods on those ships. Each card has either 2, 1 or no urns on them. When you discard a card with 2 urns, two goods of that color are protected from the pirates. For example, if a player has 2 blue goods and discards a blue card with 2 urns, then he may choose which two cards are protected. After all players have finished discarding cards (which is voluntary; players are not required to protect their goods), the attacked ships are moved back to the nearest safe port and may move again towards Carthage.