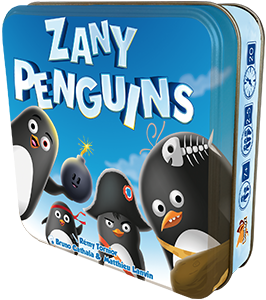 In Zany Penguins, you want to make sure that your tribe of penguins is the one that takes control of the Earth, so do what you can to take charge of regions such as the desert, jungle, and the North Pole.

In game terms, each region has a set of cards numbered 1-9. To set up, shuffle the deck, then deal each player a personal deck of 18 cards. Each player starts with two cards in hand.

On a turn, you draw two cards, pass one card each to your left- and right-hand neighbors, take the cards passed to you, then simultaneously play and reveal one card in front of you on the table. If you play a 1, on your next turn you play and reveal two cards instead of one; if you play a 2, it blows up all 6-9 cards played that same turn; and if you play a 3, on the subsequent turn everyone else plays before you do.

After eight turns, for each card color on the table in front of you in which you have the highest sum of all players, you score the sum of all cards of this color in your hand. For each color in which you don't have the highest sum, you score the single lowest card of this color in your hand. Players tally their scores, and whoever has the most points wins.