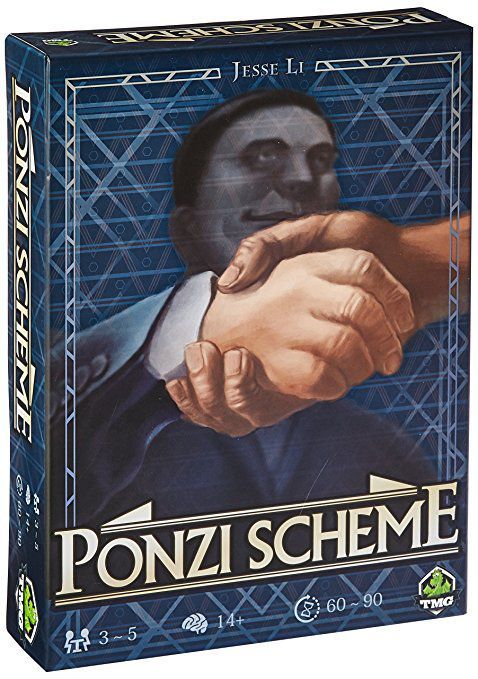 Based on the textbook example of financial scams, "Ponzi Scheme" is the term used to describe the technique Charles Ponzi employed in 1919 to operate one of the most notorious financial fraud in history.

In the game Ponzi Scheme, players are scammers trying to trick investors into funding fraudulent investments with the promise of extremely high returns. You need elaborate trading skills to keep your operation afloat as long as possible, and as time goes on the dividends you need to pay every turn will only pile higher and higher! But when someone declares bankruptcy, the remaining fraudster who forged the biggest shell corporation wins the game!

The goal of the game is simple: Don't be the first player to go bankrupt!

In more detail, on each turn, players must take one new Fund card from the Funding boards along with a corresponding Industry tile and cash as indicated on the card. You need to pay the "promised reward" of each Fund card in a number of rounds.

After all players have taken their Fund cards, they may choose to initiate an "inside trade" with one other player in order to buy the Industry you want with a price they can't refuse, or sell your own Industry to them with a good price.

At the end of the round, players rotate their Time Wheel 1 or 2 spaces, and pay the "promised reward" to the bank if any Fund card is due.

The game continues until at least one player cannot pay the "promised reward" due and goes bankrupt. That player is out of the game, and the remaining player who has the most VP on their Industry wins.