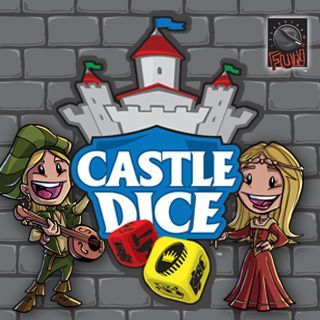 Castle Dice is a light worker-placement, dice-drafting game in which the players have been ordered by the king to build castles along the borders of the kingdom. The player who can create the greatest castle will become the new heir to the throne. Players will explore the land by rolling the dice, and then take turns gathering resources from them. These resources are then used to hire workers and improve castles. Players must gather and spend wisely as the Barbarians from the neighboring lands will attack players and steal their resources throughout the game. At the end of seven turns, the player who has built the greatest castle (earned the most victory points) wins the game!